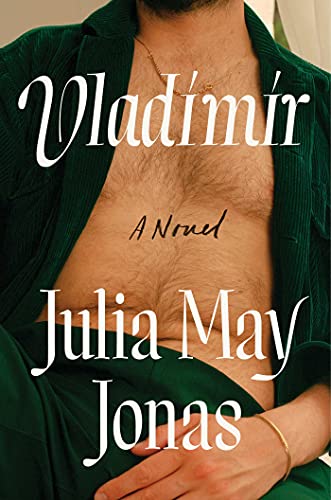 When a friend brings a book to you and says, “I think this may be weird, read it and tell me what you think,” it goes without saying that curiosity is aroused. Particularly when the friend has read the book and is seeking a second opinion.

The cover didn’t help my initial impression of the book. I love book covers and judge a lot by them and this one did not speak to me or appeal to me. Still, I was now curious if I would find Vladimir a ‘weird’ book or not.

First, props to Julia May Jonas for what in my opinion she did well. She has written an engaging story, that reads quickly, and despite my moments of frustration with her main character, kept me reading. Do you know how some books are an effort to finish? This one was not. Some of her characters were very realistic, ironically, she seemed to do best with the aging professor-husband of the main character.

Perhaps equally ironic the one I took most issue with was the point of view character- a woman. My issues with this character remind me of the ongoing debate in the writing community about writing from one’s own point of view/experience.

The point of view character in Vladimir is an aging, female, university professor.

Jonas is several decades younger than her protagonist, works on a university campus but in the theater, and her field of expertise has no overlap with her main characters. In other words, she’s watched aging, women, university professors and on that basis felt ready to write from the point of view of one.

As someone who in real life is much closer to the main character than Jonas is, I was at times rolling my eyes at the inaccuracies and internal conflicts that Jonas gave this character. They were often the concerns of a younger, non-academic person. Fortunately, most readers of this book won’t be aging, female academics, so they won’t be bothered by these details.

Now for the weird part. The book starts out with all the trappings of literary fiction: life-crisis, questioning of values and meaning, potential turning points, and affairs. Fairly standard stuff told with an engaging voice.

About 2/3 of the way in, however, the novel appears to be veering sharply into the Shades of Grey territory. So sharply that I felt like I’d been dropped into a different story. This was followed by an equally sharp correction (by now I felt like I was in a car with a drunk driver) and we were once again back into Lit Novel territory and then the final sharp lunge of direction happened, with no foreshadowing at all. Which as a writer and reader I dramatically dislike. You can throw in all the surprises you wish, but give me a heads up with a hint of foreshadowing, or I’m likely to accuse you of lazy writing.

My response to my friend then became, “Yes, this is a weird book. I felt like I got in a car with a drunk driver – by choice – and spent the trip wondering about my own life choices.”

Writer of non-fiction focused on disability services/studies; fiction writing that often incorporates the p.o.v. of disabled characters. View all posts by christyoslund